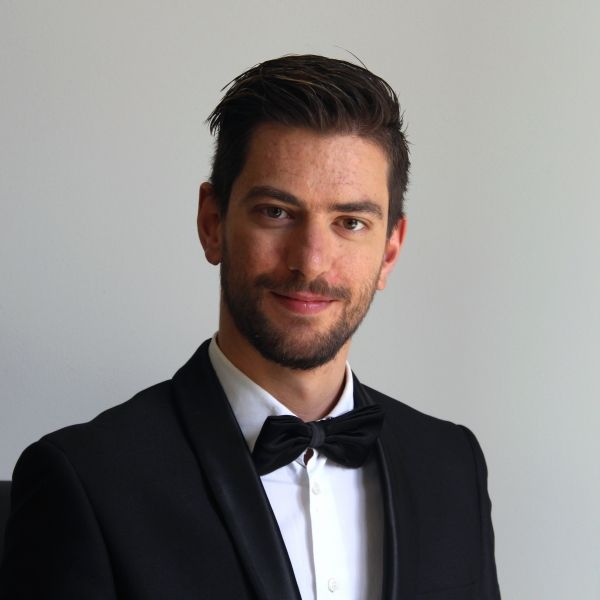 Born in Bergamo, Alessandro Ravasio started his musical studies in early childhood, playing the piano and the saxophone. When he was 18, he discovered his passion for singing, and after some years of private lessons, he enrolled in Scuola Civica di Musica Claudio Abbado in Milan; he graduated in 2017.

He started his singing career in the choirs of several Italian opera houses such as the Teatro Donizetti in Bergamo and the Teatro Municipale in Piacenza, where he made his debut on stage as Leporello (Don Giovanni, W. A. Mozart) and Sparafucile (Rigoletto, G. Verdi). In November 2018, he had the honour of singing the role of Talbot in Donizetti’s Maria Stuarda in a performance with Mariella Devia held at the Teatro Sociale in Bergamo.

Around the same time, he discovered the Baroque repertoire during masterclasses held by Gemma Bertagnolli, debuting the role of Strabone in the contemporary premiere of La vedova ingegnosa by Giuseppe Sellitti. Over the years, he has sung in different vocal ensembles, such as Micrologus, Concerto Romano, Accademia d’Arcadia, Fantazyas, Coro Ghislieri and Cappella Musicale di S. Maria Maggiore(Bergamo) and took part as a soloist in several productions such as Johannes-Passion (as Jesus and in arias), Kaffeekantate (as Schlendrian) and Cantata BWV 61 by J. S. Bach, Dixit Dominus, The Messiah and Aci, Galatea e Polifemo (as Polifemo)by G. F. Handel, Monteverdi’s Orfeo (as Plutone), de Cavalieri’s Rappresentatione di Anima, et di Corpo (as Tempo), Bononcini’s Arminio (as Segesto), Stradella’s Ester (as Testo), Melani’s L’empio punito (as Atrace).