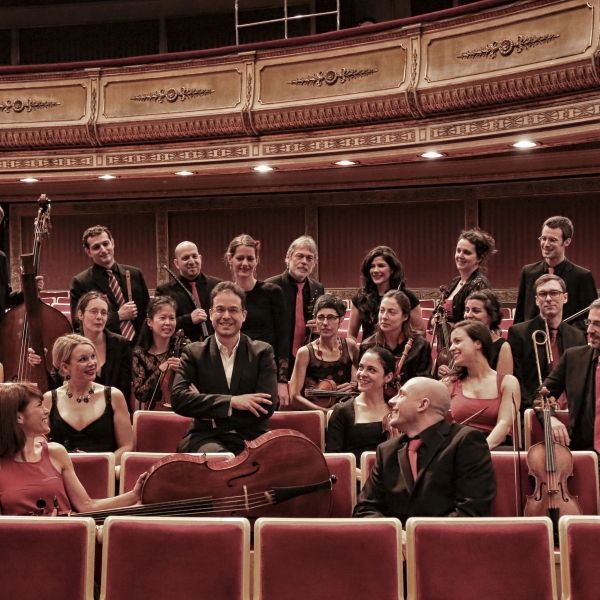 The Cappella Mediterranea ensemble was founded in 2005 by the Swiss-Argentinian conductor Leonardo García Alarcón. As the name suggests, the ensemble initially focused on music from the Mediterranean Basin, and wanted to offer a different approach to Ibero-American Baroque music. With time, the repertoire of Cappella Mediterranea has become much more diverse and expansive – with 45 concerts annually, the ensemble explores madrigals, polyphonic motets and operatic works. This mixture of genres resulted in a unique style, characterised by an unusual understanding between the conductor and the musicians.

In just a few years, the ensemble has gained recognition and widened its audience thanks to their rediscoveries of previously unreleased works such as Michelangelo Falvetti’s Il diluvio universale and Nabucco, as well as new interpretations of works which became a staple of repertoires, including Claudio Monteverdi’s Vespro della Beata Vergine and L’Orfeo, as well as Bach’s Mass in B minor.

The ensemble’s success with Cavalli’s Elena at the 2013 Festival d’Aix-en-Provence resulted in invitations to the most prestigious stages worldwide, including the Grand Théâtre de Genève (Handel’s Alcina in 2016, Cavalli’s Il Giasone in 2017, Purcell’s King Arthur in 2018, Rameau’s Medée and Les Indes galantes in 2019), the Opéra national de Paris, the Amsterdam Opera (Cavalli’s Eliogabalo in 2016 and in 2017, respectively) and the Royal Opera of Versailles.

The decision to take up residency at the Opéra de Dijon in 2018 has enabled the ensemble to produce a series of previously unpublished works such as Antonio Draghi’s El Prometeo, Francesco Sacrati’s La finta pazza (2019) and Luigi Rossi’s Il palazzo incantato (2020).

The ensemble also showcased Jean-Philippe Rameau’s Les Indes galantes at the Opéra Bastille to celebrate the 30th anniversary of the building’s erection and 350 years of Académie Royale de Musique – the production was dubbed the best production of 2019 by the Forum Opéra online magazine and the New York Times.

Starting in 2020, Cappella Mediterranea has been adapting its repertoire to the circumstances at hand, supporting virtual festivals organised by its partners: Grand Théâtre de Genève, Opéra de Dijon (the online stream of Il palazzo incantato was a great success despite the fact, that the performance was held without live audience), Festival de Namur, Festival d’Ambronay, Royal Opera of Versailles – all in hopes to return to public concerts soon.

Cappella Mediterranea performs on a regular basis at prestigious venues and festivals such as: Ambronay, Festival de Saint-Denis, Victoria Hall in Geneva, the Théâtre du Châtelet in Paris, the Château de Versailles, the Konzerthaus in Vienna, the Concertgebouw in Amsterdam, Carnegie Hall in New York, the Teatro Colón in Buenos Aires and many more.

Cappella Mediterranea’s discography comprises more than 30 critically acclaimed albums recorded for a number of prestigious labels, including Ambronay Editions, Naïve, Ricercar and Alpha Classics. In early March 2020, the ensemble released an album featuring Draghi’s El Prometeo. March 2021 saw the release of an album Rebirth, the result of collaboration between soprano Sonya Yoncheva and Leonardo García Alarcón and its ensemble for Sony Classical. The other plans for 2021 included the recordings of Lamenti & Sospiri, a collection of madrigals by Sigismondo d’India for Ricercar, and Monteverdi’s L’Orfeo for Alpha Classics.

The ensemble Cappella Mediterranea receives support from the Ministère de la Culture et de la Communication- DRAC Auvergne Rhône-Alpes, the Région Auvergne-Rhône-Alpes, the city of Geneva, a private foundation in Geneva, as well as a circle of friends and supporting business partners such as Siaci Saint-Honoré, Quinten, Synapsys, Chatillon Architectes, and 400 others. Cappella Mediterranea is member of the Fevis and the Bureau export.