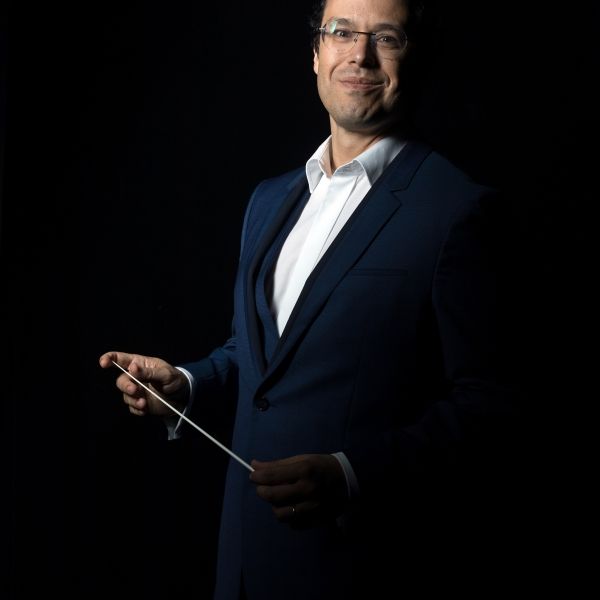 Leonardo García Alarcón graduated from piano studies in Argentina in 1997, and soon moved to Europe, where he studied at the Conservatoire de Musique de Genève in the harpsichord class led by Christiane Jaccottet.

Within a few years, he became one of the most respected conductors on the Baroque music scene, who enjoys popularity and esteem among the most prominent musical institutions, starting from the Opéra national de Paris to the Teatro de la Zarzuela in Madrid and the Grand Théâtre de Genève – the city where he began his career. He began his forays into the Baroque under the patronage of Gabriel Garrido.

In 2005, he founded the Cappella Mediterranea ensemble, and soon afterwards he gave rise to the Millenium Orchestra, which collaborates with the Chœur de Chambre de Namur – one of the best contemporary Baroque choral ensembles, which has been led by Alarcón since 2010. The artist thus lives his life between Geneva (where he teaches the class of Maestro al cembalo at the Haute école de musique), France (where he is an assiduous pillar of Festival d’Ambronay and, since 2017, a resident artist at the Opéra de Dijon) and Belgium – occasionally he also returns to his homeland in South America. This life in motion and a form of geographical eclecticism go well with Alarcón’s repertoire, which is distinguished by passion for reviving little-known works by composers such as Cavalli, Sacrati, Draghi, Falvetti and many others.

He is the one to be credited for the rediscovery of Cavalli’s operas, including Eliogabalo – which opened the 2016 season at the Opéra national de Paris, Il Giasone in Geneva and Erismena at the 2017 Festival d’Aix-en-Provence. In 2018, as part of his residency at the Opéra de Dijon, he brought back Antonio Draghi’s El Prometeo, followed by Francesco Sacrati’s La finta pazza (the first opera brought from Italy to Paris) in 2019 and Luigi Rossi’s Il palazzo incantato in late 2020.

As a conductor and harpsichordist, he participates in festivals and plays in concert halls around the world. In November 2018, his version of Claudio Monteverdi’s L’Orfeo staged by Sasha Waltz was showcased at the Staatsoper in Berlin. In September 2019, he saw the resounding success of Jean-Philippe Rameau’s Les Indes galantes at the Opéra Bastille, produced for the 350th anniversary of the Académie Royale de Musique. In 2019, Leonardo García Alarcón won the Best Conductor Award of the Forum Opéra online magazine.

Since March 2020, the artist has been adapting his repertoire and concert programmes to the circumstances at hand, actively participating in virtual festivals and streams (the stream of Rossi’s Il palazzo incantato in December 2021 at the Opéra de Dijon was a great success, in spite of the fact, that the performance was held in the absence of the public), as well as ad performing before live audience whenever possible.

Leonardo García Alarcón’s recordings are widely acclaimed by critics. In 2016, the artist released I 7 Peccati Capitali – an original programme based on Monteverdi arias, released by the Alpha Classics label. Praised by the press, the album was nominated for the 2017 Victoires de la Musique award in the Best Record of the Year category. 2018 saw the release of his albums dedicated to the works by Jean-Baptiste Lully, Joan Manuel Serrat (De vez en cuando la vida), and Jacques Arcadelt (box set); the latter won numerous awards. In February 2019, the Alpha Classics label released Il Giasone on DVD. Summer of 2019 saw the release of Lully’s motets, followed in March 2020 by Draghi’s El Prometeo, with original third act lost and recomposed by Leonardo García Alarcón on the basis of the existing libretto. August brought the release of George Frideric Handel’s oratorio Samson with the Millenium Orchestra and the Chœur de Chambre de Namur. In March 2021, Sony Classical released an album Rebirth, the result of the collaboration between soprano Sonya Yoncheva and Leonardo García Alarcón. The plans for the year 2021 included three other albums: Lamenti & Sospiri, a collection of madrigals by Sigismondo d’India with the sopranos Mariana Flores and Julie Roset (Ricercar), Monteverdi’s L’Orfeo (Alpha Classics), and Le violon selon Bach with the violinist Chouchane Siranossian.