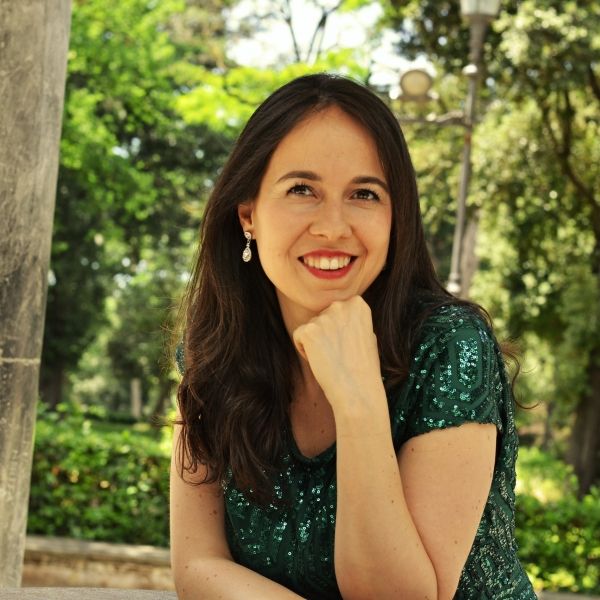 Maria Chiara Gallo, mezzo soprano, was born in Correggio (Italy) and graduated in singing at the "A. Peri" Conservatory. She studied then with S. Mingardo, M. Piccinini, A. Tosi, and currently with S. Tedla. She got a scholarship to study at the Teatro Lirico Sperimentale in Spoleto; she attended in Barcelona the Academia de Musica Antigua of the Fundacio CIMA, directed by Jordi Savall. She won the “Beca Bach 2017” scholarship from the Bach Zum Mitsingen Association (Barcelona) singing as a soloist cycles of Cantatas by J. S. Bach, coached by Ton Koopman. She participated as a soloist at the Académie Baroque Européenne Ambronay, conducted by S. Kuijken.

Recent and upcoming engagements as a soloist include: Stabat Mater by Vivaldi with Accademia Ottoboni in L’Aquila for the Barattelli Foundation, recitals in Spain with Musica Ficta, a tour in France and Portugal with Arsys Bourgogne (M. Zeke), Stabat Mater by Pergolesi in Malta with AbChordis Ensemble, Aus Licht by Stockhausen with Nederlands Kamerkoor for the Holland Festival, a tour and two recordings with Rinaldo Alessandrini and Concerto Italiano, concerts for Utrecht Oudemuziek Festival and MiTo Festival (Italy) with Ghislieri Choir, a tour in Australia and New Zealand with Nederlands Kamerkoor and Peter Dijkstra, concerts in Bologna, Modena, Venice and a recording with Accademia d’Arcadia, concerts in Bruges and Utrecht with Vox Luminis (L. Meunier), an oratorio by Caldara in Treviso with R. Zarpellon, a duo concert in Reggio Emilia with Monica Piccinini.

She graduated in “Foreign languages and literatures” and specialized in “Promotion of Cultural Activities” at the Universities of Bologna and Modena.